This morning, I went into my writing group completely unprepared to write.  I had to show up at 11:00 a.m. and I’d been doing something else when the timer startled me with its petulant beeping, reminding me to get online immediately, if not sooner!

Now, most times, when I go into the group, I know what I’m going to write — at least I have some idea or framework for the words I’ll be putting down — but for some reason, this morning I had completely forgotten that I had to write this blog post, so when one of my writer friends asked me what I’d be working on, I had to tell her, “I have no clue,” which somehow led to a discussion on creative constraints, which in turn reminded me of a homework assignment I had many years ago in art college.

One of the most challenging homework exercises we were asked to do was: “Paint the sound of a musical instrument using only two colours.”  It was a tough assignment on so many levels.  Only two colours?  How can you paint anything with only two colours?  (I cheated — I used yellow and black, which has a bluish tinge when it’s thinned out, giving me a green when mixed with the yellow, so I had a total of four colours.  White, from the gesso underpainting, black, yellow and the greenish mix of the two pigments), but OMG! How do you paint sound?  If you’re writing, how do you describe it?  I chose the sound of a flute, because it reminded me of birdsong, flight, lightheartedness, happiness, and liquid, running water.

You get where I’m going with this?  The instructor was asking us to paint feelings, emotions and impressions.  I can no longer recall what the painting ended up looking like, but I do remember it perfectly described my emotional connection to flute music.  (And now that I think about it, that’s the same thing I ask myself now, whenever I write a story.  What does the emotion look like?  How can I describe the emotional connection for my reader?)  At any rate, that was my first exposure to the idea of using constraints to kickstart the creative experience. 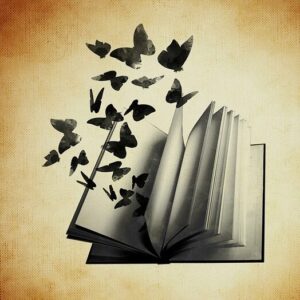 There’s a popular misconception that the imaginations of creative people are unfettered, wide open, unrestricted in any way, but nothing can be further from the truth.  Most creatives rely heavily on creative constraints to spark our creativity and give us some direction.

If someone were to hand you a pen and a blank sheet of paper and tell you, “Write me a story,” you’d be hard-pressed to jump in and start writing, but if someone said, “Write me a story about your favourite meal,” you could immediately describe it, how it makes you feel, the last time you had it.  You could remember other occasions — the people you were with when you shared the meal, its different flavours, textures and even sounds, and a thousand other memories associated with it, all of which contributed to the reason why it’s your favourite.

Imposing constraints on a topic eliminates everything that distracts from the subject in question and everything that doesn’t relate to it, and it gives your mind something concrete to focus on, freeing it to bring in other associations and connections with that topic.  You’re free to consider only that meal and your history with it, without worrying about the new dent in the car, the taxes due next week, planning a birthday surprise or what’s on tv tonight. There’s no need to even think about what you’ll write.  The images, impressions and sensations are already there in your head.  All you need to do is get them down on paper.  This is the power of effective writing prompts.

When I started taking writing seriously, I began as a “pantser”, someone who wrote by the seat of my pants.  I’ve since learned that I need to be more of a “plotter”.  I get a lot more done in a lot less time by creating a rough outline of what I want to say and the points I want to make ahead of time.  That way, I don’t lose my focus, and my work is more powerful as a result.

Editing, for example, is largely a matter of imposing constraints, limitations and restrictions on your writing.  Your first draft is basically created by vomiting out all the ideas, plans, character sketches and concepts onto the page so that you can make sense of them in the second and subsequent edits.  So why not impose some constraints before you start, so you can save yourself hours of rewriting later on?  If your story ends up being too limited, you can add more in later, but if you start lean and mean, you’ll have a better, more coherent storyline, more clarity and a more consistent theme.

This means writing with the end in mind.  I don’t mean the end of the story necessarily, but I do mean the point you’re trying to make.  If you write about an event that happened to you as a child, keep in mind the psychological and emotional outcome, the fallout from that event.  That will shape the way you write about it.

When I was a kid, I was bitten by a dog.  I could have written about the dog’s appearance, the yard he was chained in, all the surface stuff.  But I don’t remember any of that. I don’t recall what colour, size or breed he was or even if he was male or female.  What I do remember is that he was chained. I remember having to tell my mother why my new pants were torn, and how scared I was.

Her response was to explain that the dog bit me because he was mistreated and a lot more frightened than I was. That dog was doing everything in his power to protect himself.  The poor guy was just trying to survive.  She turned an incident that could have traumatized me into a deeper, more positive life lesson. Since then, my relationship with animals has been an attempt to understand and communicate with them, and a desire to help them whenever possible. Since that time, I’ve had a soft spot for the underdog, those who have no choice in the hard knocks that life has imposed on them.

Writing with the end in mind applies especially to writing memoirs.  When you first apply a life lesson, a theme, a psychological or theoretical point to the memoir as its raison d’être, you don’t need to think about everything that doesn’t fit the point.

But if you don’t know what the point is to begin with, then you have a problem.  You end up throwing in everything but the kitchen sink, leaving the reader confused and mildly annoyed that you wasted his time.  So cut anything that doesn’t fit the theme or point of the story.

There are plenty of other types of constraints you can use which not only don’t stop your creativity but actually add to its power.

The next time you write a story or add an anecdote to your memoir, think about what constraints you can apply to the process before you start.  Pick one or two and start writing.  I guarantee, they’ll give your creativity the boot up the backside it’s been waiting for.

Inevitably, you’ll have an idea or an insight that doesn’t fit inside your current parameters.  Keep a notebook handy to jot it down so you can get right back to your writing.  You never know when those odd, outside-the-box ideas might spark another story or add to the meaning, depth and complexity of your current one.

P.S.  If you’ve enjoyed this article, please leave a comment below and let me know what you think about using creative constraints.  I promise, I’ll reply.