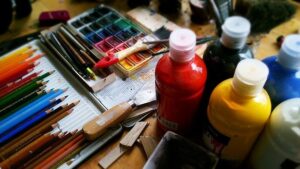 I like to call myself a recovering artist.  I like this description because it has a certain curiosity-piquing je ne sais quoi and it references my lifelong addiction to art and creativity.  It also raises the question of why anyone would voluntarily quit the enchanting life of an artist.

Spoiler alert — doing shows all the time becomes increasingly physically demanding for an ageing painter.  All those classy exhibitions certainly look glamorous on the outside, but behind the scenes, there’s a whole lot of grunt-work, and I was fed up with grunting.

Q. What’s the difference between an artist and a puppy?

A. Eventually, the puppy quits whining.

The Road Not Taken

So, for most of my life, I self-identified as a creative artist and illustrator, but all that changed when I joined a local seniors’ group for writers.

My father had been a long-time member of this particular covey of creaky creators and he loved its warm sense of community, acceptance and belonging.  For some years, still busy with my own career, I had observed his enthusiastic involvement from a dispassionate distance, but after his death, I decided I would check it out, since I’d been trying my own hand at writing, with an obvious dearth of any discernible degree of success or even a modicum of talent.  Not to mention the fact that I had, at last, attained the golden key to their closely-guarded gates — I became a senior myself.

Great, I thought.  Perhaps their years of accumulated wisdom would rub off on me.  Maybe they could give me some pointers.

Right off the bat, they said that my work wasn’t as bad as I’d imagined, which was a soothing balm to my self-inflicted emotional bruises, but I knew that if I wanted to do anything serious with my writing, I must improve.  At that point, I didn’t have Clue One what “serious” even meant, but as a voracious reader, I knew that some people actually did this kind of thing for a living and I wanted a piece of that.

Shortly afterwards, I joined another, ostensibly “Even More Serious” group and attempted to learn some of the techniques suggested by its published writers during their weekly meetings.  Slowly, my work improved. 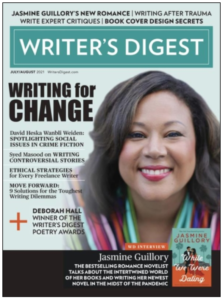 As happens all too often with these writers who take themselves a tad too seriously, this second assembly disassembled amidst a sh*t-storm of acrimony and anguish, but by this time, I was well on my way.  Once each month, I trembled in anticipation, reverently opening my very own subscription to Writer’s Digest magazine. With my own two hands, I built (read: assembled according to instructions) two floor-to-ceiling bookcases to house my personal library of “how to write” books.  On the external hard drive duct-taped to my beat-up old MacBook my horrible, self-indulgent, half-finished first novel lay gathering digital dust, now that I’d gained an inkling of just how bad it really was.

I became obsessed with learning everything there was to learn about the craft of storytelling.

For the next few years, I continued to attend meetings with the seniors’ group.  Eventually, other members were asking me to help edit their short stories prior to their being submitted for publication. I submitted short stories and memoirs of my own to a variety of online and offline publications and to my great joy, several of them were accepted. I started teaching regular classes on technique and the writing craft, first through the seniors’ centre and eventually presenting workshops in other communities.  I joined an online writer’s forum and discovered that I knew a lot more than I thought I did.  But no matter how much I learned, it was not enough. Like one possessed, I immersed myself in learning how stories work and focused on the fundamental elements that make a story effective. I was becoming an honest-to-god story coach.

Naturally, a lot of the stories presented in the senior writers’ group were autobiographical, which led me to study the construction of memoirs.

What I found was a remarkable similarity between a good memoir and a good novel.  The principles were the same – the protagonist wants and/or needs something, faces obstacles that change him, reaches a climactic confrontation and either achieves his goal (happy ending) or doesn’t (tragedy). 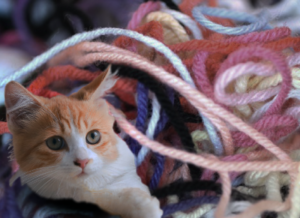 Once I understood this, it became easier to see the structure beneath the plot and to discover the biggest problem that most senior writers and would-be memoirists encounter — trying to make their whole life fit this structure, which is virtually impossible.

For the vast majority of us, our lives aren’t that neat.  Life is messy – somewhere along the way, we get stuck, ending up arse over teakettle down a rabbit hole.  Then we attempt to extricate ourselves and try again with something entirely different in the opposite direction.  If you could take a picture of the average life, it would look more like a kitten with a tangled ball of yarn than a 100-yard dash, or even a marathon.

But the more I studied the great teachers of memoir, the more clearly I could see where I and many of my students had gone wrong.  Eventually, the next piece of the puzzle clicked into place. 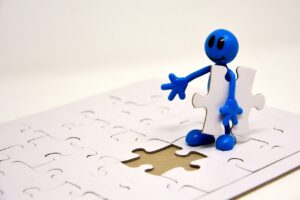 A memoir is not an autobiography.  A memoir is a connected series of events that does fit into the Protagonist—Goal—Conflict—Transformation structure of storytelling.  Maybe not at first…maybe not entirely, but with a bit of tweaking, polishing and embellishment, it can be turned into a good story.  Even a great one — one that changes minds and lives.

We all do this, all the time, don’t we.  We tell each other our own anecdotes, like the one about that embarrassing time we farted in public.  Oh, we can laugh about it now — makes a great story, right?  But at the time…

Or the harrowing episode when we lost the family pet, or the adventure when we fell off the boat…

Or…or…or… (BTW, we got the pet back, battered but unbowed.)

All of those stories are grist for the memoir mill.  No, they’re not your whole life, but they do illustrate something about you.  Through your actions, they show your reader who you are. 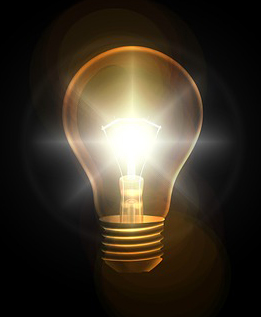 And that’s when the final puzzle piece smacked me upside the head and the lightbulb went on.

Not that I’m trying to mix my metaphors.

But that little epiphany put all the myriad bits of theoretical knowledge into perspective and changed my entire approach to the way I write and the way I teach.

A memoir isn’t about the events that happened.  A memoir isn’t even about the writer — not exactly. The events and the protagonist are merely a vehicle for the big idea that holds a story together.

Memoirs show the reader who the author is, their beliefs, their values, their outlook on life.  It gets deep under the skin of the writer-protagonist and uses the events of their life to illustrate those universal human truths and values common to all of us.

We all have stories.  This is just one of mine.  What are yours?

So, is this blog post a memoir?  I suppose, if you want to go all meta on me, sure, it is.  Because it’s about a specific part of my life, it talks about the struggle I had on the way to becoming a decent writer, and the way I felt about the journey.  It gives you a bit of insight into who I am. It’s based on my recollections and put together in a way that makes a certain amount of sense.  It has a theme of sorts, based on my determination to learn a difficult craft and do it well. And yes, I’ve embellished the language a bit, moved some of the timelines around to make it work, but that’s all part of writing.  The essential facts are true.

So yes, this is a memoir.  Not a long one.  Not a particularly inspiring one, but it is a memoir.

Right down to the neglected novel languishing on my external drive.

And one day, I may even resurrect it.