Music surrounds us.  Throughout human history, it has played a big part in our communications.  But only in the past 100 years has it been available to everyone all the time.  Before this, only a few very wealthy patrons could enjoy music in their homes, and only if they knew how to perform, play an instrument or hire someone to play for them.

Every religion has used music to praise a variety of gods, (entertainment being a large part of their attraction for the general populace), and indigenous peoples have all had their own styles of music, often used to communicate over long distances, to appease the spirits and to ward off evil.  Music has long been known to soothe the savage breast.

It has swayed the emotions of its listeners throughout history. It can charge up determination and confidence before battle, underscore a funny movie scene or cartoon, introduce a political figure or give gravitas to the scary parts of a tv show.

Spoken languages also depend on a certain pitch and rhythm for their interpretation of the nuances of communication.  Many oriental languages depend on tone and pitch to determine the meanings of words, but it also applies to many other languages — the English language among them.

Take the simple word “no”, for example.  “No?” with a rising pitch asks a question.  The same word, “No!” can be a command or a rejection.  “Noooo…” a protest.  The simple word “no” is basically a negation but it’s the song of the speech that creates additional meaning, giving our speech colour and nuance far beyond the fundamental significance of the word itself.

Too many characters in fiction and memoirs sound like monotones.  It’s important that we as writers learn to use punctuation and emphasis to replicate the song of the spoken word.  Translating the spoken word into written words is a skill well worth acquiring, as it’s often the bits of dialogue that an editor will check first to see if the writer understands how to use it.

Use Dialogue to Discover Character

So how can you use the “song” of dialogue to differentiate characters?  You need to be able to hear the conversation in your head, for one thing.  You need to understand your character’s motivations and desires, the secrets and hidden thoughts, and then figure out how they’ll affect the way he says his words.

Is he an educated man?  He’ll say the same thing differently from one who never went to high school.  His vocabulary will be larger, more diverse and colourful.  And even his thought patterns will be different because he’ll have the words to formulate and describe complex concepts which are unavailable to someone who hasn’t the tools even to conceive of them.

A man who’s furious will say the same speech differently than one who’s mildly annoyed or one who’s amused.  We can also show the character’s physical actions and body language to imply nuances in his speech, basically “showing” instead of “telling” the reader that the character is furious, annoyed or amused.

Okay, so that’s easy to say, but how do you do it? 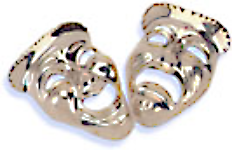 For most of my life, I’ve been a part-time actor, doing community theatre and summer stock.  One of the hardest things about learning a part wasn’t memorizing the lines.  It was “finding” the character.

You’re given a script with some basic stage directions and you have to come up with a living, breathing, believable character that the audience can relate to on some level.

For me, the lines, the playwright’s words, were not what gave me the clues to the personality I needed to become.  It was the way those words were spoken.  It was the physical habits and body language of the character that brought her to life.

I would spend hours trying out different tones of voice, ways of moving, personal habits and mannerisms to help me differentiate my characters.  Was she overly concerned with her appearance?  Then she’d be careful to show herself to advantage, to move and stand like a lady, a tart or a model depending on her role in the play, which meant that her motivation was based on how others saw her, and not on her own merit, which could mean that she lacked self-assurance.

Did she habitually bite her lip or was she a nail-biter, indicating insecurity, fear and weakness?  Did she swagger, indicating either confidence or bravado?  Was she a smoker?  Eventually, after trying things out, I would hit on one trait that epitomized that specific character, and from then on, I had the key to the character’s motivations and inner desires.  And that determined everything — how I walked, how I talked, how I dressed and groomed myself, how I interacted with others and most importantly, how hard I would struggle to get what I wanted.

From there, I could build out more habits, mannerisms and speech patterns that also showed those motivations and desires, but until I really got these things on a visceral, physical level, my character remained flat, monotonous.  Once I “heard” her in my head, the dialogue came alive.

Do they speak in short, choppy sentences?  Broken or partial sentences?  Or are they longer, more thoughtful passages full of polysyllabic utterances and memorable quotes?  Do they use a lot of curse words or are they terribly proper?  How big a vocabulary do they have? How careful or sloppy is their pronunciation?  Do they speak in a dialect or accent?  Loud or soft?  Forceful or reserved?  Pushy or shy?

The character’s mood has a great influence on the utterance of a speech as well.  An angry character will wield his sentences as weapons, while a more considered character will get very quiet and foreboding (think Alan Rickman’s brilliant portrayal of Professor Snape).  Someone who’s desperately unhappy might speak in broken phrases with long pauses between them, but someone who’s excited will use a lot of words very fast. 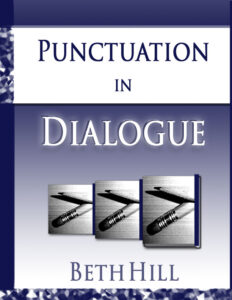 Punctuation and sentence length are the keys to the nuances of your character’s speech that show your reader who that character (and no other) really is.  Think of your characters as a chorus.  Each one has a part to play, a song to sing.  Each one has his own theme song, different from all the others.  By incorporating the music of each character’s individual dialogue style, you can create an ensemble piece that will keep readers enthralled.

Punctuation is a huge subject and much too in-depth to cover in a single blog post, but if you want to learn more, you could do no better than to download Beth Hill’s brilliant PDF, Punctuation In Dialogue.  Master this, and your writing will never run out of music again.