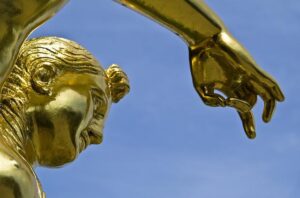 Last week’s post pointed out that little coincidental changes can alter the entire trajectory of a story. But at what point does coincidence become “deus ex machina” — defined by the Oxford dictionary as, “an unexpected power or event saving a seemingly hopeless situation, especially as a contrived plot device in a play or novel”?

The key here is the word “contrived”. Last week, I said,

“Our lives hinge on these coincidences.”

But herein lies a problem for writers. We can’t use them. We can’t dump a convenient coincidence into our story whenever we need something to change. We can’t simply insert a character or an event into our story to explain a key point or provide a necessary clue.

Deus ex machina is not a literary tactic that is appreciated by sophisticated readers. It’s a cheat. Readers feel ripped off if you suddenly have some outside influence come in and save the day, provide some critical information or prevent the damsel in distress from walking off a cliff. Especially if that outside influence only shows up at that point in the story and is never mentioned again.

In order to stay true to the logical chain of cause and effect, we must provide a reason for that coincidence, and one of the best ways to do so is to introduce that character or event earlier in the story. This foreshadowing gives the reader a reason to expect something from them later on. Otherwise, they show up, do their necessary job and disappear, never to be seen or heard from again. Readers are suddenly ripped out of the story and told, “Nyah, nyah! Fooled you. It’s not real.”

Without a logical, linked sequence of events, our stories cannot be believable. Even in fantasy or science fiction, the rules governing magic or technology must make sense to the reader. There has to be a reason why something works the way it does. Changes happen in these fictional settings because of the logic inherent in the story’s worldview. Brandon Sanderson spent a great deal of time working out how magic works in his fictional worlds and J.R.R. Tolkien invented entire languages to support the stories he wrote.

If we’ve laboured hard and long to make our story world real and immersive for our readers, if they’re fully invested in the characters to the point that we can make them forget their surroundings and share emotions with the character, laughing at the right places, tearing up when the character loses everything, then imagine how annoyed they’ll be if we suddenly tear apart that veil of illusion and tell them it was all a fake. Some wizard we’ve never met or heard of suddenly shows up, waves a wand and makes the danger go POOF! and then vanishes, never to be heard from again.

The missing sequence in Raiders of the Lost Ark comes to mind, where Indy somehow magically follows Marion to the island where the Nazis will open the Ark. In this case, the logical chain of cause and effect has been left on the cutting room floor. The explanations for how this happens are crucial to the story, but for some reason, they were edited out, leaving a huge plot hole.

A Valuable Lesson For Us All

So we must make our changes realistic, logical and true to the characters’ motives and behaviours. Our characters must be the agents of their own destiny. We writers are not allowed to bring in outside forces to help them out of a tight spot at the last moment. Our characters have to figure it out on their own, or at the very least get help from someone the reader already knows about. But the major changes have to be instigated by your main character. Incremental changes can lead to the big ones, but the story’s about our protagonist after all, so the most significant changes happen because of his choices and actions, and in the process, changes happen to him and his worldview.

Make sure that you sow enough seeds of backstory, foreshadowing and cause throughout the storyline that your seeming coincidences have a logical reason to be there. If a character needs to acquire an object or some information at a crucial point in the story, make sure the reader knows about it ahead of time. This adds not only to the logic but also to the suspense, especially if the reader is aware of the value and impact of what’s missing.

Mastering this one skill will make your stories believable, events logical, and characters realistic. Your readers will thank you.