This week, I’ve been trying to come up with a riveting blog post idea and I’ve spent nearly two hours dithering, avoiding the problem. Rather than picking one of the hundreds of topics I’ve collected for times like this, I logged onto Joseph Michaels’  UnChained Writers, my favourite online chat group for writers, where I knew I would find others who’d understand and commiserate when I whined and complained about how stuck I was feeling.

“Why do we do that to ourselves?” I said, and gave myself a little pep talk…“Okay, goofball! Just pick one and run with it. Something will come out of it, even if it’s not epic.”

A friend of mine popped in and said, “I hear you, Bev! I do the same thing.”

Yes! Here was the conversation I needed to get me through and maybe give me an insight into what might be stopping me.

“Hard not to beat ourselves up about it, though,” I said. “I think we figure if we do, we can beat other people to the punch, so they know that we already know what idiots we are. That might change their contempt to pity. And isn’t that just a really sad state of affairs?”

“You nailed it!” Her comment helped me to remember that I was not alone.

“The human mind is an infinitely fascinating swamp,” I said, which started me thinking about motives, what’s under the surface, and why we might constantly want to beat ourselves up when we fall short of perfection.

Millions upon millions of human beings limit ourselves through our own self-contempt. We have thoughts like this every day. Even my pep talk above included a derogatory self-description — “goofball”. Self-help books all over the world say it’s because of early conditioning, that it’s easier to listen to negative self-talk than positive. It’s a survival technique to help alert us to possible danger and yadda, yadda, yadda.

But before that…what motivated the self-talk? What danger did we perceive that triggered it?

On the surface, my dad was a funny, loving, open-minded, clever, kind, generous guy. Intelligent, creative, well-educated and popular. People liked him.

But below the surface, dad was extremely insecure. He took forever to make a decision, even about the little things, because he was terrified of wrong choices. He was also really, really hard on himself if he made a choice and it didn’t turn out to be perfect. This perfectionism made him a brilliant woodworker. Everything he built was exquisite, but as a way to live his life, it was excruciating for him. He was a writer as well, and his prose simply sang, but he could never bring himself to submit it anywhere. He could never allow himself to feel comfortable or accomplished. Nothing was ever good enough.

Now, his father was also a perfectionist and demanded that from his sons. So, very early in his life, my dad developed the habit of beating himself up, blaming himself for mistakes before his father could do so, in order to let his dad know that he already knew he was stupid and that he was sorry. He’d knock himself out to fix things so they were exactly right. From his point of view, it was better to be pitied than accused — better to acknowledge that he was contemptible than even for a second show pride in an accomplishment, because it would never, ever, measure up to his father’s standards. Pride goeth before a fall after all, so it was better to fall first before pride had a chance to rear its ugly head with the inevitable results. 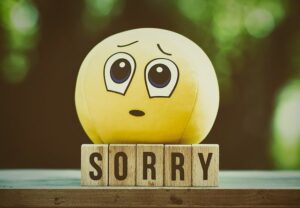 Nowadays, we might call my grandfather’s attitude a form of psychological abuse, but in the early part of the twentieth century, it was the accepted method of keeping children in line, seen but not heard. The result was a whole generation who felt inadequate and fearful of attempting the unfamiliar.

When we’re young, we’re supposed to try new things, we’re supposed to make mistakes and learn our life lessons. When we’re prevented from doing so, it creates all kinds of neuroses and phobias. Some, like my dad, might become insecure. Others, whose parents provide everything on a silver platter and for whom all obstacles are removed, become entitled brats, no matter how old they are.

Kids need to learn how to fall down, so they can learn how to get up again, brush themselves off and get back in the game. This deeper knowledge, this “learning how to learn” is carried forward into adulthood. If this fundamental skill is suppressed, through abuse, blame, accusation or excessive parental helicoptering, it creates a feeling of inferiority or entitlement and we lose the inclination or ambition to try new things, learn new skills, learn the habit of confidence. It’s different, so it’s scary, or it’s supposed to be handed to one on a plate, pre-digested.

It’s only when we take those first few scary steps into the unknown that we gain enough new knowledge to discover the next few scary steps. Only by taking those scary steps one at a time do we gain the courage to persevere.

And it’s our courage and perseverance that trigger our momentum and develop our confidence, allowing us to achieve those accomplishments that bring us the well-deserved pride to which we’re honestly entitled.

It’s all about the baby steps, Baby!

By taking baby steps, not only do we learn more about the project at hand and where it might be going, but we also learn more about ourselves and our own capacity for growth. And I don’t know about you, but I believe that’s why we’re here. It’s our raison d’être.

Pick a Step, Any Step

So, are you stuck at the beginning of your memoir or novel because you don’t have it all figured out yet?

Write a chapter. Any chapter. Doesn’t have to start at the beginning. You probably won’t even know what your beginning is until you’re most of the way through the book and have some inkling of your theme. And If you already have some of your other chapters and scenes figured out, write them.

Take that first easy baby step and write the bits you’ve already worked out. As you write each scene, you’ll get glimmers of what else might work in the story, but you can’t get there unless you write those scenes and think about them in more depth. Only then can you begin to understand what your story’s really about.

My favourite visual for this is travelling down a twisty mountain road at night with only one headlight. You can’t see far, but you can see far enough to go the next several yards. Maybe slowly, but it’s progress, nonetheless.

As you build out more of the story, connections will fall into place. You may have to work at creating logic chains and transitions to connect them, but the more you have to work with, the more sense it will make. You’ll gain clarity as to how your opening scene and your ending will fit into the parts you’ve already written.

And if you think about why this story inspired you to write it in the first place — if you can recapture that initial excitement, it will be easier and a lot more fun to write. Remember, first drafts are for ideas; revisions are for repairs. So get those ideas down, even if you don’t have the whole story figured out. The more you write, the more the ideas will come.

You can’t edit a blank page.