In the past, we’ve discussed the concept of emotional layering, and I’ve been exploring the realm of layered emotions in depth for the past few days.

Last week, my mentor, Joseph Michael, The Scrivener Coach, asked me to help with the live accountability sessions on his membership site, Unchained Writer. These online accountability meetings are live writing sessions where writers show up and write together on their various projects. It’s a way to share our writing journey each day within a tight-knit, friendly community, one that understands the perils and tribulations of being a writer.

Little did I know when I agreed, what lay in store.

It started off okay. As an attendee, I’m already familiar with the software used for these sessions, but learning how to host a session is a whole other kettle of fish. Joe walked me through the material on Zoom, showed me how he did it using screen sharing, and sent me all the instructions and login information he thought I’d need.

I spent several hours learning how to make the basics work, did several practice sessions and felt pretty good about my first live session.

To my great surprise, it went well — a few little hiccups, but overall, not bad for a newbie.

Hey, I’ve got this, I thought. I’d oh-so-cleverly written it all down in sequence – even added an additional element. In a short practice session the night before, everything worked fine. I was ridiculously proud of myself.

I was about to learn the meaning of hubris.

It’s been said you must never challenge the gods. They reward you with humility.

On the morning of the session, I overslept. I rushed to put on my makeup, did my hair, dressed in casual business attire from the waist up (below the camera’s view, no one would know I was wearing sweatpants and big fluffy bunny slippers), and then stumbled upstairs to find the kitchen awash in melted ice from the now-defunct fridge and freezer. As I dashed to the bedroom where I record my videos, I tossed some towels in the general direction of the swamp to mop up the worst of it.

I turned on the computer and thank all the gods, it fired up right away. Whew! At least one thing was going right.

I logged into the video software and got everything lined up and ready to begin. People started showing up in the chat and I toggled on the music for the lead-in.

Wait! What? Where was that echo coming from? Somehow, between the practice session the night before and the startup, I’d made some kind of change, resulting in horrendous audio feedback. Within moments, comments started appearing in the chat about the racket. I had to stop the music mid-note and come on-screen early, apologizing profusely.

At first, I assumed there was something wrong with the audio file I was playing, but the sound issue continued as I was speaking. I couldn’t hear it, but everyone else could. Not only that, but several comments in the chat informed me that my voice audio was so faint that they could see my lips moving, but all anyone heard was the feedback loop.

I abandoned my plan to do my overly ambitious lesson on storytelling and started the countdown timer so people could at least get some writing done.

By this time, I was too unnerved to try doing any work of my own. My confidence had dispersed into the ether. I was still unfamiliar enough with the software that I didn’t know what else might go wrong if I tried to switch windows and get some writing done. Would I share my first draft screen with the entire group? They’d see all the mistakes that I warn people not to do — editing as I write, starting sentences over and over to get the right words, and that I (gasp!) sometimes write ungrammatically! Nope. Better to make a cup of tea and clean up the mess in the kitchen while the timer counted down.

All too soon, the clock showed we were nearing the end of the hour, and I headed back to the computer. The timer finished its last few ticks, and I clicked over to the on-camera view. The sound issue continued until one of our more tech-savvy writers suggested I mute my computer’s speakers. (Note to wannabe geeks and nerds — on a Mac, press the F10 key — who knew?) The trick is remembering to press it again when you’re no longer recording.  Scary when you watch the replay and there’s no sound at all! 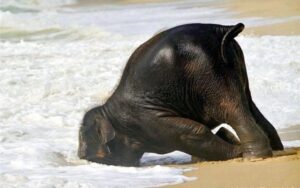 At any rate… the magic F10 key worked. At last, I could be understood. With some prompting and encouragement from the group, I addressed the elephant in the room.

I admitted I was embarrassed at the screwups, apologetic for putting them through all that and hugely grateful for finding a solution, but I was also badly flustered. So much so, that I couldn’t face doing the lesson I had prepared, and besides, I didn’t want to waste people’s time. They’d scheduled this hour and we all have busy lives nowadays. Stage fright has never been an issue for me but I was seriously considering taking it up as my latest hobby.

So I chose an on-point discussion question. Given my current situation, I asked the group what was their default setting when they were about to learn something new. Did they jump in feet-first or read the manual cover to cover? Or a combination of the two?

That’s when I discovered another minor glitch the software had in store. There’s a multi-second delay between when I speak, and when the audience sees and hears it. So I’m sitting there, expecting answers and — nothin’ ! I remembered Joe had said something to that effect a few days earlier, so I scrambled to find something to say to fill the dead air while the other attendees had time to hear the question and write their replies.

After an interminable delay, the answers started coming into the chat and I could interact with them. But to read them, I have to look down, not up at the webcam, so I spent most of the session with my eyes down. Not exactly recommended procedure for proper on-screen etiquette. Once again, I’d messed things up. Just when I thought I was on the home stretch. 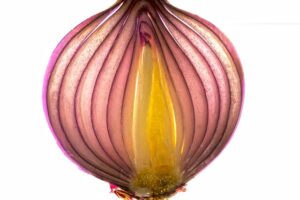 Which brings me back to my original point — layered emotions.

When we experience emotions, they are never in isolation. There’s always a mix. For me, the mix was embarrassment, chagrin, self-doubt, disappointment, frustration and determination. I had let people down and as a perennial people-pleaser, that bothered me. A lot. I owe a debt of gratitude to this group and I felt terrible about not being perfect for them. So I apologized and let them know how much they meant to me.

Perhaps some of the other writers in the group were happy it wasn’t they who were going through this embarrassment. Now, I’m not saying this was the case, but… well… human nature. Perhaps they were glad they weren’t up there themselves, making such a mess of things. But I doubt they took pleasure in my discomfort.

Usually, there’s a whole mix of emotions we experience when we see someone else screwing up. There’s no single word for it in English, so, as English often does, we’ve adopted the German word, Schadenfreude. (Pronounced: SHAH-den-FROY-deh) This is the guilty delight we take in watching someone else screw up. If we’re empathetic, we feel pity for them, happy it’s not we who are making such a muddle, but there’s also a guilty feeling of smug superiority.

It’s not a particularly commendable state of mind, but it’s human. It comes from a subconscious awareness that safety lies in numbers and conformity — the “Tall Poppy” syndrome personified. Don’t rock the boat. Don’t try new things, because different is dangerous. The amygdala, the lizard brain, prefers that we all fit in and don’t make waves, because if we do stand out, the sabre-tooth tigers out there in the darkness might notice us and wander in for a midnight snack.

But this group… this wonderful group… didn’t see it from a Schadenfreude point of view. This is a group of writers who are all striving to accomplish things — hard things like writing novels, creating courses, building businesses, learning software of all types, some of them despite enormous hardships in their private lives. And this group is so supportive.

So they didn’t think, “Let’s cut her down because she screwed up.” They told me, “Kudos to you for showing us it’s okay to make mistakes on the way to knowledge. It’s okay to be imperfect. It’s okay to be human, because, by your example, you’ve given us permission to make our own mistakes.”

They let me be human and imperfect, and, in doing so, awarded me the courage to keep going. Because I owe it to them and to Joe, to be the best I can be. Not perfect. But trying. Improving. Better each time. And my gratitude knows no bounds.

If you would like to be a part of this amazing accountability group of writers who meet at least once a day, you can go to Unchained Writer and sign up.  You won’t regret it.